Maps have long played interesting and important roles in the history of the Isles of Shoals. John Smith published a map with his book A Description of New England in 1616 that helped introduce the Isles to Europe and named the region “New England” for the first time. Fishers, traders, and military navigators have relied on nautical charts to get in and out of Portsmouth Harbor or stop at the Isles of Shoals safely up to the present day. Authors and tour guides have also used maps for their artistic and illustrative purposes, helping secure a sense of place in texts about the Isles of Shoals. Finally, descriptive maps provide instructions for harbor and walking tours of the Isles, helping visitors to make the most of their trips.

Below are sample of the many maps housed in the Vaughn Cottage Museum collection. Perspective, detail, and scope vary on maps of the Isles of Shoals and Star Island according to the cartographer’s purpose. Bird’s-eye views with north at the top of the map are typical for illustrating landmasses, but many variations are seen in the examples here. Some maps are oriented with the South at the top, the direction one would face approaching Gosport Harbor to land on Star-Island. Profile or pop-out views of landmarks provide references to help tourists identify landmarks and also serve as decorative illustrations. Contour lines and careful numeric labeling show elevation and sea level to aid with navigation.

Maps can help us understand where we are or where we are going, but they can also inspire imagination. Perhaps the nature of being on an island prompts people to draw and read maps to feel connected to the rest of the world. Enjoy the selection of visual representations below and think about what the cartographer wants you to see.

John Smith journeyed to New England in the summer of 1614, having been ousted from the Virginia colony after serving as one of its leaders. He came in search of whales or gold, but found mostly fish. This was apparently the first complete map of the region. The Isles of Shoals are labeled as Smith’s Isles for their cartographer, although the name didn’t stick. Many other place names, such as Boston, were changed into English from native terms at the request of Prince (later King) Charles upon his review of Smith’s map.

This 1857 map of Gosport demonstrates how the population was spread on Star Island during the town days and provides evidence that many names for geographic features have changed. As it is today, the bulk of the population was centered on the northern portion of the island, with little to no habitation south of the chapel area (what is the Stone Village today). The U.S. Coast Survey Station stands out as an interesting featured on the southern portion of the island, suggesting the Isles of Shoals history of connections to government and military purposes runs deeper than White Island Light and the World War II-era uses of Appledore and Duck Islands.

Drawn in the conference era, this map shows the importance of perspective in map-making. The cartographer opted for a “Bird’s-eye View,” in order to show what important buildings look like using their profiles. The map also deviates from the traditional perspective that places north at the top of the page. Instead, the viewer sees the island looking south, as one would when approaching Star Island in a boat. Marshman is missing from the Stone Village, dating the map to a time before 1998.

This nautical chart was part of the American Coast Pilot publication that provided such charts for sailors on the Atlantic Coast. Edmund March Blunt’s firm published 21 editions of these charts between 1796 and 1867, when the copyright was sold to the United States Government. This map was published in 1864 as part of the 17th edition. Aimed at assisting sailors, the map provides precise coordinates and measurements in order to prevent shipwrecks. The orientation is just slightly off of a true north, presumably to show the coastline in the most likely way sailors would approach it.

This map was created in 1875, and was likely also a part of the American Coast Pilot series after the government over publication. It provides a view of the islands as seen at sea level, likely to aid navigators using line-of-sight close to the Isles of Shoals.

“Wabanaki Country” is an entirely different type of map, aimed at demonstrating human, rather than physical, geography. This comes from a book in the Vaughn Cottage Museum’s collection about the natives who lived on the mainland near the Isles of Shoals immediately prior to European settlement. Created by Stacy Morin in 1988, the map shows that the Isles of Shoals were part of the area settled and managed by the Wabanaki, an allied group of five Algonquian-speaking peoples. While we don’t know the Algonquian names for most areas in New England, this view reminds us that John Smith did not voyage into virgin territory, instead he happened upon areas that were already long settled, hunted, and fished. 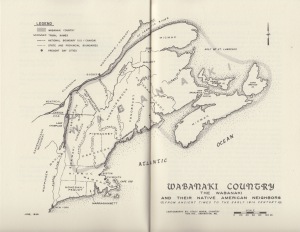 6 Wabanaki Country: The Wabanaki and Their Native American Neighbors from Ancient Times to the Early 18th Century (From an unnumbered book, Vaughn Cottage Museum collection) 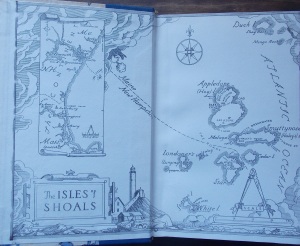 As with his sister’s book, Oscar Laighton’s Ninety Years on the Isles of Shoals includes a map of the island chain. This version neglects artistic details, but includes human adaptations to the local geography, such as the town line boundaries (on the existing line between Maine and New Hampshire) as well as the breakwaters between Cedar Island and Star/Smuttynose Islands. 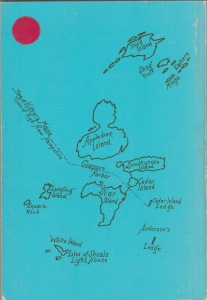 This 2012 hand-drawn illustrated map by Gretchen Gudefin is aligned to show Star Island from the view of someone arriving at the pier. It features key destinations on the island and hand-drawn pictures of them as well. Rather than for sailing or accompanying a historical narrative, this map is designed for conferees or day trippers exploring Star Island and looking for ways to amuse themselves. 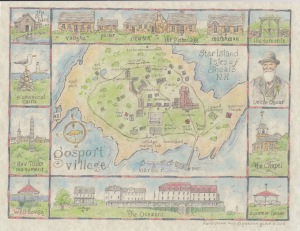 In contrast to Map #9, Lawrence Bussey’s 2009 brochure “Welcome to Historic Star Island” provides a more detailed map for visitors who are new to Star Island. 26 individual locations on the island are labeled on the “Star Island Walking Tour Map.”

This map serves multiple purposes. It uses an actual nautical chart, created by the MapGuide Digital Cartography company, but functions as a greeting card that can be used as a souvenir from the Isles of Shoals. Contour lines on both landmasses and in the water and numeric labels show the elevation and sea depth around the islands, which make the map useful for navigation purposes, but printing the image in color on nice paper makes a nice image and gives the map an artistic, rather than technical purpose. 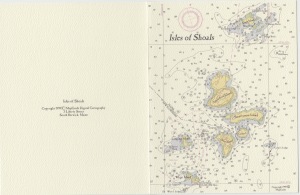 The last map takes an artistic/tour focus to all of the Isles of Shoals, as has been done frequently with Star Island. Illustrations such as ships and birds found on other nautical maps give it a fun look, and individual landmarks are identified with small profile-like drawings added to the general bird’s-eye view. While not valuable for navigation, this type of map provides visitors a sense of direction and highlights destinations they may want to see during their visit.

2 thoughts on “Putting the Isles of Shoals on the Map”