Have you heard the buzz? The Vaughn Cottage Museum artifacts are the subject of a brand new book!

The pages are curated by Tara Kelly in collaboration with Melissa Saggerer, and the photographs were taken by Mikael Kennedy, all of whom are former Pelicans!

To preview and purchase your copy of the Vaughn book, click here. Books may also be purchased here on Star Island in the lobby book store.

*All of the proceeds benefit Vaughn Cottage and the Thaxter Museum. Thank you for your support!

This book is amazingly well-done and the photos are simply classic—a beautiful display of the Isles of Shoals history.

This summer here on Star Island, is quite an exciting one indeed. We are celebrating 400 years of the mapping of the Isles of Shoals!

To celebrate this anniversary, we are venturing back in time as interpreters to see what life was like in the fishing village days of Gosport. We will host these 3 Interactive History Days on June 25th, July 23rd, and August 27th.  We would love it if you could join us! Click here for more information.

Don your nicest breeches and petticoats and make your way to Star Island!

Hello Shoalers!
Around here, Shoalers is the name we use for people who love to hang out at the Isles of Shoals. I can now say that I am one of them. I am so excited to return for the summer of 2014! It is going to be one full of history, community, old friends, chirping birds, beautiful sunsets and sunrises, and oh yeah, maybe a bit of rain to help our veggies and flowers grow. The Vaughn Cottage Museum also has some exciting exhibits that I honestly cannot wait to share with you. Keep checking our blog for the riveting history news.

We have an exciting summer planned for this year, and I hope you can come join us! We’ll save you a seat on the porch. 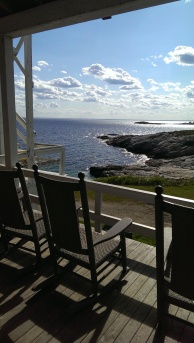 “What was Benjamin Green’s Apothecary?” I wondered this summer when two very sweet little girls brought me this little glass artifact. 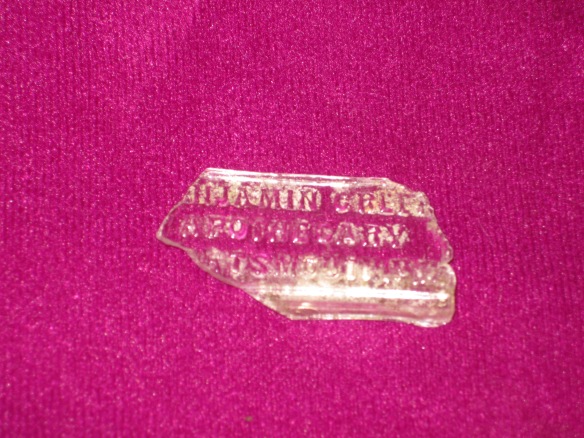 This glass piece is what we think to be the bottom of a pill bottle from the 1800s. As you can see, the inscription reads “Benjamin Green Apothecary Portsmouth, NH”. The little girls found it on an outing to Smuttynose Island and were so excited to show it to us! So, we did a bit of research to tell us about the artifact, and found a cool blog called “Walk Portsmouth”–check it out! We discovered that the drugstore was opened by Benjamin in the late 1800s and was “one of the most elegantly equipped drug stores east of Boston”, as said by the Portsmouth Herald. A patron who came into the Vaughn museum joked that maybe it was Louis Wagner’s pill bottle. Well, we are not sure about that, but you never know! The apothecary, which was like a drug store, would have sold all sorts of medicinal remedies for ailments. The building was located in the Peirce Block of Portsmouth (which is in Market Square) where a Starbucks currently stands.

We lovingly present to you a project we’ve been working on all summer.  Our outstanding intern Caitlin Selby wrote the screenplay and we shot and edited this very short historical documentary for you all!

Enjoy and let us know what you think!

Thank you so much for everyone who submitted photos!  They were all great and we had a tough time deciding.

If you have ever seen an old clay pipe, you may (or may not have) been curious about other pipes of the sort, and how they became such a trend in our history. What did some of their decorations mean, and who smoked them? In the film National Treasure, actor Nicholas Cage discovers an old clay pipe with the carving of an intricate ship on the base of the pipe. Spoiler alert…we then discover that also on this pipe is a secret inscription which leads the treasure hunters on another journey to discover the priceless treasures of world history. Now, unfortunately, not all pipes are that exciting and hold the key to invaluable historic artifacts. Sorry to get your hopes up. Though, here on Star Island, we have unearthed many full pipes and even more bits and pieces of pipes that were used by the people who used to live on the islands.

The women and children even smoked pipes out here! A poem from the historic account Gosport Remembered, entitled “A Woman From Star Island. Isles of Shoals, 1844” tells of the pipe-smoking women of the shoals:

“Over the embers she sits,

Close at the edge of the grave,

Her withered lips between,

She rocks in the flickering light

Her figure bent and lean…”

To the rest of the world, these little pipe pieces might seem pretty insignificant in the grand scheme of things. But to us lovers of the island history, they are tangible proof of the kind of life that the early Shoalers lived. Needless to say, they are pretty significant in our book. Take a look and see for yourself!

Check out these cool clay pipes by Dawnmist Studio!

Have you ever seen any cool old pipes? Tell us about it!

Grab a button and share the love on your blog!

Vaughn Cottage
Create a free website or blog at WordPress.com.