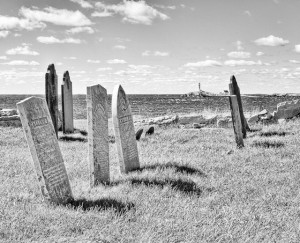 As it’s Halloween, I thought you all might want to hear a little about the ghosts at the Isles of Shoals.  I was prompted to write about it as I saw this article in Gossiportsmouth‘s twitter feed.  At the very bottom they mention Isles of Shoals ghosts:

Since the 1800s the nine islands ten miles off of Portsmouth have been haunted. Hawthorne even wrote about “Old Bab,” a ghost who lived between the hotel and the sea. At the Oceanic Hotel on Star Island people have heard sounds as if someone is rummaging through drawers and moving furniture on the fourth floor – only there’s nothing but empty attic space. On Smuttynose Island the ghost of Louis Wagner is said to haunt the place in remorse for the two little Dutch girls he murdered here. One of Blackbeard’s wives is said to appear on Lunging Island as a milky-white lady-like figure. White Island has yet another Blackbeard wife ghost – a woman looking for her baby.

Have you seen the Ghost Hunters episode about Star Island?  They cover some of the ghost stories we have.  We have had multiple “ghost-hunting” groups come to the island to investigate the paranormal sightings which have been reported for hundreds of years.

During the summer we offer tours of the cemeteries and ghost lore on Star Island usually at least once a week during our conference season.

There really are too many stories to write here, you can read some stories here:

Ghost stories on Pelicans are Pelicans

Hollow Hill summarizes many of the Isles of Shoals stories

The Isles of Shoals Association adds a fair amount of ghost lore in their Early Star Island History page.

Some ghost stories including Beebee girls and photos of Beebee cemetery

The Isles of Shoals in Lore and Legend, by Lyman V. Rutledge

And more about the gruesome Smuttynose murders here:

Many of the resources available onlne about the Smuttynose Murders- Free Louis?

Let us know what your favorite Isles of Shoals ghost stories are- or if you’ve had something happen to you out there!